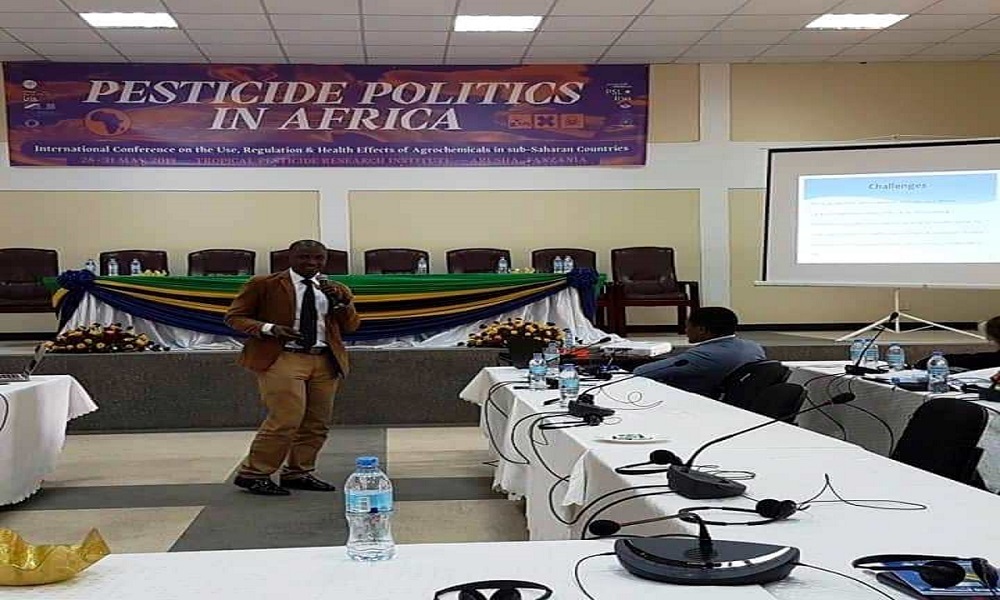 Pesticide Politics in Africa, an interdisciplinary international conference on the use, regulation and health effects of agrochemicals in sub-Saharan countries which was held on 29-31 May 2019, at the Tropical Pesticide Research Institute (TPRI), Arusha –Tanzania was developed upon the observation that the chemical-based intensification of agricultural production in sub-Saharan Africa, which is likely to be aggravated by climate change, bears new occupational and environmental health hazards, which are exacerbated by the use of highly toxic pesticides (often banned in Europe), by informal trade, by dysfunctional control systems, by lack of access to risk information, by the inexistence of protective gear appropriate for tropical climates, and by the diversity of exposed populations (≈ 80% of the active population has an agricultural activity – mostly on family farms, potentially exposing vulnerable populations such as pregnant women and children) as well as the consumers who are exposed to these pesticides through the food residues.

Uganda National Association of Community and Occupational Health (UNACOH), through it’s Pesticides Use, Health and Environment Project, Participated in this conference through the advocacy officer. The project has a broad goal of reducing the negative health and environmental effects of pesticides by basically promoting the Integrated Pest Management (IPM) strategy and this has been done through collaboration with stakeholders in the 17 districts of Uganda, directly working with their respective District Farmers’ Associations (DFAs). Three specific objectives have been set as a contribution to the broad goal, with the first specific objective focusing on gathering of existing and generation of new knowledge, second specific objective focusing on dissemination of the existing gathered and new knowledge through community meetings/dialogues, national, regional and international conferences, social media, and national sectorial meetings as well as the different advocacy platforms where the project is a member (Uganda Farmers’ common Voice Platform (UFCVP)). And the third specific objective focusing on lobbying for the mainstreaming of the safe and sound pesticides handling and management by various CSO in the 17 districts namely: Eastern Region: Kumi, Pallisa, Budaka, Bugiri and Kapchorwa, Northern Region: Nebbi, Adjumani, Kitgum and Gulu; Central Region: Kayunga, Wakiso, Rakai and Sembabule; Western Region: Ntungamo, Bushenyi, Kamwenge and Masindi, all this achieved through community sensitization/dialogues, social media and conferences.

Participation in this conference *Pesticides Politics in Africa* was through an online call for abstracts in the lines of acute pesticide poisoning and the health effects of pesticides. This interdisciplinary conference aims at laying the foundations for long-term scientific cooperation between African and European scholars on the management of pesticide-related occupational and environmental health hazards in Africa. It aims at exploring the trade-offs between production and prevention that underlie the expansion of chemical-intensive agriculture on the continent, to understand the relations between technique, knowledge, and power that condition the inclusion of African populations in the globalized economy, and to grasp the resulting health and environmental inequalities.

Goal: To disseminated research findings and project experience in the registration of acute pesticides poisoning by PHE-project trained health care workers as well as learn from the experience of other countries in the context of pesticide regulation, use, prevention and management of both health and environmental effects.